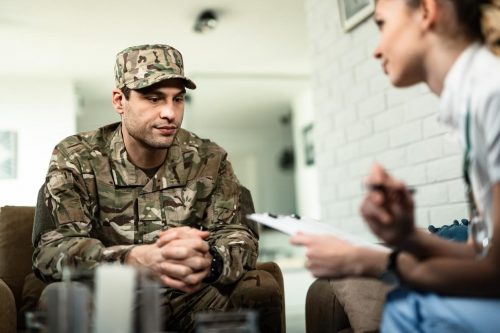 About 3.5% of U.S. adults have post-traumatic stress disorder (PTSD), according to the American Psychiatric Association (APA).Veterans in particular are affected by PTSD. According to the U.S. Department of Veterans Affairs (VA):

Other conditions affecting veterans and other Americans every day include anxiety and depression. Data from the Anxiety and Depression Association of America (ADAA) shows that about 18% of U.S. residents experience an anxiety disorder in a given year. As for depression, the National Institute of Mental Health estimates that 7.1% of all U.S. adults had a major depressive episode in 2017, the most recent year for which statistics are available.

Medication for treating PTSD, anxiety and depression can help people live healthy, meaningful lives—if the medication is used safely. This guide outlines ways that medication can be safely used to treat these mental health conditions.

What Are PTSD, Anxiety and Depression?

PTSD, anxiety and depression are mental health disorders that have many possible causes, including genetic vulnerability, stress, traumatic experiences and medical problems. Chemicals inside and outside nerve cells are also involved. According to a Harvard Health Publishing article, there are “millions, even billions, of chemical reactions that make up the dynamic system that is responsible” for areas in the brain. The functionality of these chemicals in the brain can affect mood, cognitive abilities, perceptions and how a person experiences life.

Symptoms of PTSD, anxiety and depression can overlap significantly, according to Medical News Today. For example, someone with anxiety may show symptoms of depression, while someone with a depressive disorder may show signs of an anxiety disorder. These conditions are often comorbid, which means that they may appear together. Someone with PTSD may also have anxiety or depression. Symptoms and causes of the three conditions, along with the populations impacted, are discussed below.

PTSD is a psychiatric disorder tied to traumatic events. Individuals with PTSD face interruptions in their present lives from disturbing thoughts and feelings related to past experiences.

The VA provides information about PTSD among veterans.

Make the Connection, an online resource from the VA, provides more information about anxiety disorders in veterans. Healthline provides a resource with an extensive list of medicines and treatments used for anxiety.

Depression, a mood disorder that impacts thoughts and feelings, can create overwhelming sadness, loss of interest in life and lack of pleasure in activities.

Each type of medication treats certain disorders. However, mental health providers may prescribe medications as “off-label” treatments for a particular condition if they can justify their approach with established scientific research. According to Healthline, off-label refers to the use of a drug approved by the Food and Drug Administration (FDA) for a purpose for which the drug hasn’t been approved.

SSRIs can help reduce the symptoms of PTSD, anxiety disorders and depression. An SSRI works by blocking reabsorption of serotonin in key nerve cells in the brain. Serotonin is essential for learning and memory formation. It helps to regulate sleep, mood and appetite. The mood of a patient improves because of the increased availability of serotonin. SSRIs may help improve energy levels and reduce anxiety, unwanted thoughts and panic attack recurrence, among other symptoms. SSRIs have been proven in clinical studies to help restore the balance of serotonin in the brain of patients. Common SSRIs include:

For further comparison of Zoloft and Paxil, MedicineNet provides a resource. The APA also provides information on SSRIs.

SNRIs, often the first choice of physicians to treat major depressive disorder (MDD), are also used for GAD, panic disorder and social anxiety disorder. An SNRI works by both increasing serotonin and norepinephrine levels and by inhibiting their reabsorption into brain cells. This action increases the levels of active neurotransmitters. Norepinephrine contributes to attention, mental focus and memory.

Examples of SNRIs include Effexor, which is the first FDA-approved SNRI marketed in the U.S., as well as Cymbalta and Pristiq. American Addiction Centers provides a resource with more information on the types of SNRIs and their side effects and risks.

Each mental health disorder has unique characteristics. Medications do too. Other treatments not involving medicines can help, as well. For example, psychotherapy, also known as talk therapy, can be given alone or in combination with medicines.

A form of talk therapy known as cognitive behavior therapy (CBT) can help expose individuals to new ways of thinking. CBT teaches people to see issues from different perspectives and reframe negative thoughts about their trauma. Among the behavioral aims of this therapy is to provide a person with tools to cope better with triggers, react differently and feel less anxious. These tools can include a daily mood log that can help patients identify cognitive distortions—differences between what they’re thinking and what’s happening in reality.

Trauma-focused psychotherapies are highly recommended for veterans with PTSD, according to the VA. Together with a therapist, a patient sets goals and develops new skills. A therapy session can involve focusing on a specific memory or homing in on the meaning of a traumatic event that affects the patient. Through various techniques, such as visualization or talking and thinking through the event, veterans can learn how to process their traumatic experiences better and change unhelpful beliefs about themselves, others and the trauma event itself.

In addition to medication and therapy, activities that can help people with PTSD, anxiety and depression include:

Here are some suggestions regarding medication safety for veterans suffering from PTSD, anxiety or depression.

Technology innovation is helping to solve one of the biggest challenges of PTSD: identifying at-risk patients shortly after a traumatic event. In one study, published by JMIR Mental Health, the use of computational analysis methods and machine learning models showed that “accurate predictions can be made 10 to 20 days posttrauma,” which means that at-risk patients could be identified for early intervention.

Similarly, the VA is leveraging predictive modeling, health care informatics, big data and artificial intelligence (AI) to provide resources for veterans and their health care providers. For example, the VA’s REACH VET program (Recovery Engagement and Coordination for Health – Veterans Enhanced Treatment) uses AI to identify veterans who are at high risk for suicide. The system scans medical records and looks for signs of mental health. Upon identifying at-risk veterans, a mental health specialist can connect with them, assess their well-being, and review and personalize their treatment plans as needed.

American Psychiatric Association, What Are Anxiety Disorders?Anxiety and Depression Association of America, Medication

Harvard Health Publishing, What Are the Real Risks of Antidepressants?

Healthline, What Are the Causes and Risk Factors for Generalized Anxiety Disorder?