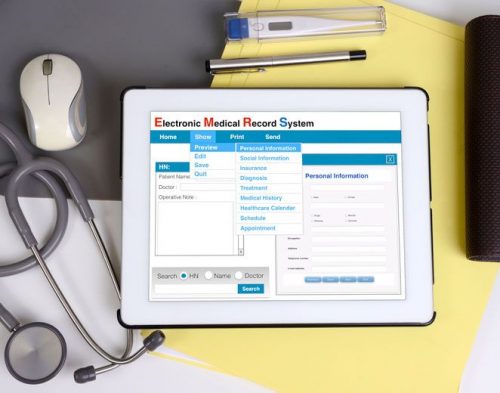 Drug and alcohol addiction is a serious problem that can damage users’ health, ruin their relationships and destroy their lives. It’s also widespread: According to data published by Addiction Center, over 20 million Americans over the age of 12 suffer from addiction to some form of legal or illicit substance, excluding tobacco. These substances include alcohol, marijuana, illegal drugs like heroin and cocaine, and prescription opioids such as oxycodone and codeine.

The roots of addiction are planted early. Studies indicate:

For those involved in the public health field, this unfortunate prevalence of addiction makes the development and delivery of effective treatment solutions a necessity. One tactic that has risen to the forefront over the last few years is using the technology tool known as public health informatics to develop treatment strategies.

This guide aims to provide medical and public health professionals with resources to help them create high-quality health-informatics-driven treatment strategies for those suffering from addiction to alcohol and drugs. These resources can lead to the development of targeted plans singularly tailored to individuals, which could make the goal of successful recovery more attainable.

The Centers for Disease Control and Prevention (CDC) defines public health informatics as “the systematic application of information, computer science and technology to public health practice, research and learning.” In other words, it’s an innovative concept that applies computer science along with technology-driven data analysis and record-keeping to health care for the purpose of delivering highly targeted care strategies.

The concept of health informatics has been around longer than one may think, given its association with modern technological concepts. In the 1960s, various health organizations including the American Society for Testing and Materials (ASTM) began standardizing several key components of health informatics, including:

Eventually, these standards branched into specified areas of care, which were typically identified by a specialized clinical outlet or trade organization. Some of these groups include:

IT in the context of health care, on the other hand, involves the following responsibilities:

For additional information on public health informatics and its functionality, visit the American Medical Informatics Association.

The data gathered through public health informatics can be used to create health strategies that specifically align with a patient’s sensibilities, as opposed to relying on a general plan of care. This could have substantial ramifications in providing treatment plans for those battling addictions.

Because health informatics has taken a more prominent role in health care thanks to the industry’s increasing acceptance of technology, it has become important for public health professionals to thoroughly explain health informatics to patients and how it is applied for the patient’s benefit. This can be done by sharing the following:

These conversations are important to have with patients. Health informatics is poised to derive numerous advantages for patients and facilities. For instance, public health informatics can be utilized in the following ways:

Centers for Disease Control and Prevention. This national health protection agency provides a PDF and a PowerPoint-formatted presentation breaking down the basic concepts behind health informatics. These presentations are public domain and can freely be used by health care professionals.

Healthcare Information and Management Society (HIMSS). HIMSS is a not-for-profit organization that aims to help shape optimal global health through technology and tech-driven information. This page provides a detailed history on the concept of health informatics.

SAMHSA-HRSA Center for Integrated Health Solutions. This organization highlights developed primary and behavioral health services to help individuals with substance abuse conditions or adverse mental health diagnoses. Health informatics is one of the key services highlighted by this organization.

Substance addiction continues to be a serious issue in the United States. It’s also one that takes many forms, from the long-standing problem of alcohol and illicit drug addiction to the emerging crisis of prescription opioid addiction. Whatever the substance, addiction can cause a wide range of negative side effects for individuals, ones that can damage the user’s health, career and relationship. Because the stakes are so high, it’s crucial that the treatment given to those seeking help is optimized to yield consistently effective results — a goal that may be attained with the help of health informatics.

Studies indicate that about one in every 20 individuals around the world have used illicit drugs. According to a 2011 report by the Substance Abuse and Mental Health Services Administration, 8.9 percent of the U.S. population 12 and older would meet the criteria that defines substance abuse disorder, a statistic that translates to 22.1 million persons. Unfortunately, only 2.6 million people are receiving treatment.

Talbot alsor reports the most abused prescription drugs are as follows:

Sometimes, drug and alcohol addiction can be deadly, and this unfortunate situation has grown dramatically over the years. Data from the Centers for Disease Control (CDC) indicate there were 16,849 drug overdose deaths in the U.S. in 1999. This number increased to 70,237 in 2017.

While studies show that the use of alcohol and nonprescription drugs among youth has decreased over time, it is still enough of an issue to raise serious concern. For instance, according to data culled from the Addiction Center website:

Studies also indicate that men are more likely to use and abuse most illicit drugs than women. It should also be noted that statistical data on illicit drugs still categorizes marijuana as an illegal drug due to federal law.

For a comprehensive look at the 2011 Substance Abuse and Mental Health Services Administration report, click this link to the full SAMHSA document.

The consumption of alcohol remains a legal and popular activity for many adults. Data mined from Talbot Recovery indicate that 51.8 percent of Americans ages 12 and older imbibe. Unfortunately, it also remains an agent of addiction for numerous individuals. According to the Addiction Center website:

A common component of alcohol addiction is the concept of binge or heavy drinking. When this behavior is isolated, the numbers can be staggering. The 2011 report by the Substance Abuse and Mental Health Services Administration indicates:

Like drug addiction, alcohol addiction can have deadly consequences. According to a report published in the Journal of the American Medical Association:

Alcohol abuse is a problem that spans multiple demographics. According to the 2015 National Survey on Drug Use and Health (NSDUH):

For a complete breakdown of the 2015 National Survey on Drug Use and Health (NSDUH), visit this link produced by SAMHSA.

Despite the fact that driving under the influence (DUI) of alcohol or drugs can yield tragic results, leading to significant legal and life-altering consequences for those who get caught, it is still something that occurs regularly.

Drugabuse.com. This resource-driven offshoot of American Addiction Centers provides a wealth of data regarding the abuse of drugs and its aftermath.

Centers for Disease Control and Prevention: This page from the national health protection agency features an in-depth look at the opioid crisis.

Unfortunately, not everyone addicted to drugs or alcohol gets help. For those who do seek treatment, professionals can use public health informatics to create treatment strategies that reach patients at their level. This can enable a more personalized form of treatment that may not only help patients battle the disease of addiction, but can also allow them to receive a higher level of overall care. Through various forms of data and devices, informatics can also help patients feel like they have some say in their treatment process, an element that could give them a better overall sense of the process.

The path toward seeking drug or alcohol treatments can sometimes start with a scary incident, like a trip to the emergency room (ER). There has been a sharp rise in these kinds of facility visits. Data from the National Institute on Alcohol Abuse and Alcoholism indicate:

Additionally, data gathered by DrugAbuse.com indicate ER visits due to pharmaceutical abuse more than doubled between 2004 and 2009.

How Informatics Can Help

As mentioned earlier in this guide, health informatics is used to analyze patient data so a personalized treatment plan can be created for individuals seeking treatment. The goal behind a custom plan is to provide a more effective means of treatment that aligns with the parameters of a patient’s past data.

There are various ways that this data can be gathered, including:

The types of data gathered by these devices include:

The gathered information makes up a patient’s electronic health record (EHR) database. This information can be accessed by a public health professional to check on various metrics important to building a personalized strategy, such as:

As the field of health informatics becomes further integrated into drug and alcohol treatment plans, the number of informatics resources continues to grow.

CDC, Impaired Driving: Get the Facts

MentalHelp.net, Addiction Statistics: How Big of a Problem Is It?

Statista, Drug Use in the U.S. — Statistics & Facts

University of Illinois at Chicago, “A Brief History of Health Informatics”